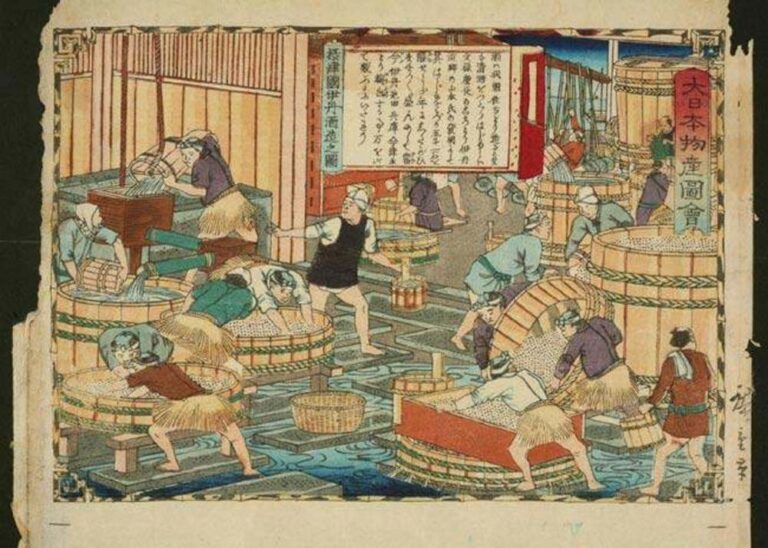 A brief history of sake

The origin of sake is unclear. The earliest mention of alcohol use in Japan is recorded in the Wei Book of Records of the Three Kingdoms. This Chinese text from the 3rd century speaks of Japanese drinking and dancing. Alcoholic beverages (酒, sake) are mentioned several times in Kojiki, the first written history of Japan, compiled in 712. Charles Bamforth states in his book (Food, fermentation and micro-organisms, 2005) the probable origin of sake (which is made from rice, water, and koji mold (麹, Aspergillus oryzae) to the Nara period (710–794). In the Heian period, sake was used for religious ceremonies, court festivities, and games related to alcohol consumption. For long time there was a monopoly on sake brewing by government, but in temples and shrines monks began to cook it in the 10th century, and they became the main centers of production for the next 500 years. The Chronicle of Tamon-in, which was written from 1478 to 1618 by monks in the Tamon-in temple, has many details about brewing sake. It shows that pasteurization and the process of adding ingredients to the main fermentation mash in three stages were established practices at the time.

In the 18th century, Engelbert Kaempfer and Isaac Titsingh published papers that called sake a popular alcoholic beverage in Japan; and Titsingh was the first to try to explain and describe the process of brewing sake. At the beginning of the 19th century, the work of both authors was widespread throughout Europe.

During the Meiji Reform period, laws were written that allowed anyone with the money and knowledge to build and operate their own sake brewery. In one year, since the law came into force, about 30,000 sake breweries have been established across the country. As time went on, the government imposed rising taxes on producers and the number of sake breweries began to decline. Most of the breweries who survived this period were founded by wealthy landowners. Landowners who grew rice and had a surplus at the end of the harvest, instead of abandoning the surplus, sent it to their breweries.

Sake cooking technology advanced during the 20th century. The government opened the sake-brewing research Institute in 1904, and in 1907 the first government-sponsored competitive tasting took place. Yeast strains specially selected for their sake-brewing properties were isolated and steel tanks with an enamell coating inside appeared. The government began promoting the use of these tanks as easy to clean, long-lasting, and hygienic because it considered wooden barrels unhygienic due to potential bacteria living in the wood. Although all these reasons for using stainless steel tanks are unquestionable, another reason why the government also wanted them was more money collected on sake taxes. The reason is simple, the use of wooden barrels means that part of the volume is lost by evaporation (approximately 3%), which could otherwise be taxed. This was the end of the time when wooden barrels were used in brewing.

When World War II brought a shortage of rice, the sake industry was significantly weakened as the government discouraged the use of rice for brewing. As early as the end of the 17th century, it was discovered that it was possible to add a small amount of alcohol to extract aromas and flavors from rice solids before pressing. During the war, pure alcohol and glucose were added to a small amount of rice mash, increasing yields up to four times. About 60% of the sake produced today is made using this technique and is referred to as “table sake”. This technique is currently used in the production of fortified sake, which is one of the premium sake.

After the war, sake breweries slowly begun to recover and the quality of sake gradually improved. In 1960, rice production finally overcame the need and it was possible to start producing Junmai-type sake – classic sake – without restriction. Unfortunately for the sake, new players appeared on the scene – beer, wine and spirits. They became more and more popular with the younger generation, until it happened that in the 1960s, beer consumption in Japan surpassed sake for the first time. Sake consumption continued to decline, despite the fact that the quality of sake was constantly improving.

Despite the increase in sake consumption in the rest of the world, production in Japan has been declining since the mid-1970s. The number of sake breweries is also declining. While in fiscal 1975 there were 3,229 sakevars across the country, in 2007 their number fell to 1,845.