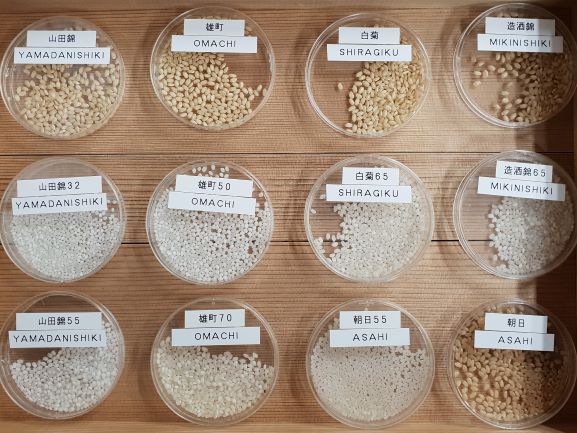 What is sake made of?

Short answer: Sake is made from rice.

Long answer: Sake is mede from rice, yeast, koji mold and water. Rice has to be from a variety of specialy bred types, which are grown only for this purpose. In most cases yeast are grown in laboratories and are what gives sake its aroma and taste. Koji mold is one of the bred molds we know, for example, from cheese. In the grain of rice, it is responsible for converting starch into sugar. Water is also an important part of sake, because it is a integral part of its production. Its chemical composition affects the final form of sake. For more information about making of sake výrobě saké click on the link.

Is sake a rice wine?

Short answer: No, it is not a rice wine.

Long answer: Sake is not a rice wine. Although this term is wastly used in english writen text. This error crept into non-Japanese texts during the Portuguese visit to Japan in the 16th century. They came to Japan along with Jesuit and they wrote first texts, where they translated Japanese kanji SHU 酒 as a term describing wine, simply because Japanese were describing by it a grape made drink – wine, which was brought by Portuguese. But in feudal Japan, they also used the same symbol for their traditional drink made from rice – sake. And on top of that, manufacturing process of sake is more similar to manufacturing process of beer, so its not close to wine at all.

Is sake a rice brandy?

Short answer: Sake is an alcoholic beverage made by fermentation of rice and does not go through distillation.

Long answer: During the production of sake, rice is fermented with the yeast Saccharomyces Cerevisiae to form an alcoholic beverage. There is a rice distillate, but it is called shochu.

Long answer: Alcohol in sake is higher than most other beverages made by fermentation (beer, wine). The higher percentage is due to parallel fermentation. This production process ensures a sufficient supply of sugars for the yeast to be able to produce alcohol and at the same time, thanks to the increasing volume of fermentation, it prevents the increased concentration of alcohol that would kill the yeast. Eventually this will happen, but only at a volume of about 19-20% alcohol in the fermentation.

Does sake mature in casks?

Short answer: Sake is not aged in casks.

Long answer: Much of the sake does not mature in casks. After production and before bottling, the sake is left for 3-6 months in stainless steel tanks to harmonize. This phase can be called maturation, but it is not maturation in barrels, as we know it from rum or whiskey, for example. But this is not a dogma. Sake aged in barrels accounts for about 1% of the annual sake production in Japan. This sake matures mainly in oak wine barrels or in cedar barrels, which give it tones of wood and resin.

Is sake for cooking?

Short answer: Premium sake is not used in cooking.

Long answer: There are three types of sake-based products – premium sake, cooking sake and mirin. Premium sake is intended for drinking and enjoying, either alone or in mixed drinks. Cooking sake has salt added. There are two reasons for this: firstly, it can be used to flavor meat / fish and, secondly, by adding salt, it is considered non-drinkable and therefore not subject to the Japanese alcohol tax. Mirin is low in alcohol, contains a relatively higher amount of sugar and is also used in cooking.